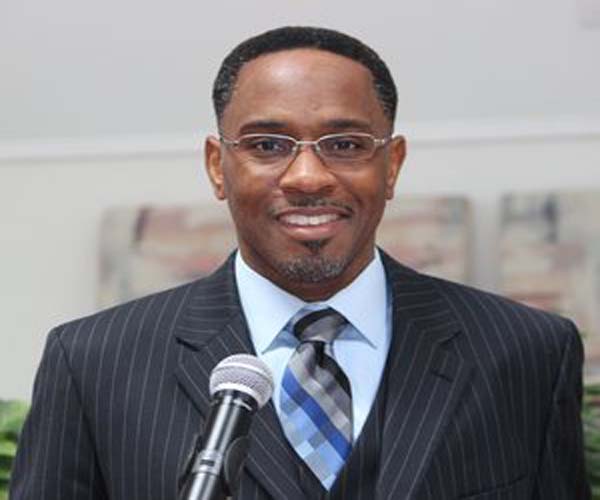 Kenneth’s first love was basketball. He played all the way through junior college at American River College, and later at Jarvis Christian College. He is also a die-hard Los Angeles Lakers fan (not to mention a Dallas Cowboys football fan). But at the age of 18, his first love was replaced with a love for Jesus Christ. He accepted Christ after a stirring Easter message from Pastor Ephraim Williams at the St. Paul Missionary Baptist Church on April 22, 1984. His life in Christ took flight from that moment forward. He moved to San Diego, CA, with his brother Brian, and together they joined Bayview Missionary Baptist Church under the pastorate of the late Dr. Timothy J. Winters, who had an enormous impact on his life and ministry. God had been speaking to his heart and calling him to ministry from the time he accepted Christ, but he formally accepted the call in May 1987. While at Bayview, Kenneth worked hard as a church member, serving as a janitor, Sunday School and Children’s Church teacher, Young Adult bible study leader, usher, and even choir member. He cut his spiritual teeth for a few years and then went on to the historic Bishop College in Dallas, Texas. After Bishop’s untimely closing, he transferred to Jarvis Christian College in Hawkins, TX, and received his Bachelor of Arts degree in Religion and Philosophy in 1991.

In 1992, Kenneth’s work in ministry officially began. He was hired as Staff Minister at St. Paul Missionary Baptist Church, where he worked from 1992 until 1996.  During his tenure at St. Paul, Pastor Reece provided guidance and direction to the Evangelism and Discipleship Department, provided Christian counseling, and performed many other tasks in support of the ministry. He represented St. Paul in various community outreach projects and served as liaison for the Billy Graham crusade. Kenneth was ordained into the ministry in 1994, the same year he married his wife, the former Lisa Nichelle Coleman.

On December 22, 1996, Pastor Reece was commissioned by God to pastor the Rose Olivet Baptist Church of San Francisco.  Through the Lord’s direction, he led the Rose Olivet Church family into a merger with the Concord Missionary Baptist Church also of San Francisco, CA.  The merger was celebrated on June 11, 2000, and the combined church is called Cornerstone Missionary Baptist Church, which he affectionately calls “The Stone.” That same year, a year of major shift and change, the first of his 3 children was born, Landon Nathaniel. The next year, May 2001, Kenneth completed graduate work at Golden Gate Baptist Theological Seminary where he received a Master of Divinity degree. Within the next few years, he received two more blessings—a son Langston Nehemiah and, finally a daughter, Kennedy Rayne.

Pastor Reece was called back to St. Paul Baptist Church in October 2019 as Assistant Pastor, with the objective of taking on the Senior Pastor role following the retirement of Pastor Ephraim Williams. It is with some degree of sadness that he leaves Cornerstone, a church that has been like family for more than 23 years. However, he is determined to follow God’s leading for his life and ministry. He prays for God to continue blessing the seeds he was able to plant in San Francisco, and that he is able to water and further develop the vineyard left by Pastor Williams. He gives all praise to God for giving him an opportunity to serve Him in ways that meaningfully impact the lives of His people; and prays for God’s wisdom and strength as he continues to follow His leading.